Huron Lake, PA (July 5, 2017) – Camp Huron Lake owner Marty Feldstein has been cutting corners for the twenty plus years he has been in charge of the sleepaway camp but nothing can compare to the annual Fifth of July Celebration he throws every summer.  Feldstein has done an absolutely brilliant job of convincing the campers and staff alike that America’s Birthday is July 5th all in the name of saving a few thousand dollars.

Since 1987, generations of Camp Huron Lake campers have been celebrating the Fifth of July by watching the night sky filled with half-priced fireworks shot off by local townie pre-teens hired by Feldstein.  The campers enjoy eating expired hot dogs and day-old buns, and adorning their festive outfits with faulty red, white and blue glow sticks.  It is a tradition that is firmly sewn into the fabric of the Camp Huron Lake family.

Each and every summer on the morning of July 5th, Feldstein and his staff raid local Walmarts and Party City stores for deeply discounted Independence Day merchandise.  In addition, he personally stops in at Phantom Fireworks to select hundreds of rounds pyrotechnics out of the bargain bin in the back of the store.   He will spare no expense when it comes to purchasing pennies on the dollar patriotic merchandise.  One summer, several years ago, the campers celebrated by waving American flags containing 47 stars and eight stripes, not that anyone noticed.  It is a labor of love for Feldstein, whose pride in America is only second to the pride in his bank account.

“I love the Fifth.  What’s great is that we teach the youngest campers and Camp America staff that we gained independence on the July 5th.  Neither really has any idea so each year they come back, their belief in July 5th becomes stronger and stronger,” Feldstein explained.  “I have, however, gotten a lot of complaints from families that their children are failing their American history exams during the school year.  I guess teaching them the names ‘George Washingstein’ and ‘Jonathan Hancock’ probably aren’t helping.”

One of the brainwashing highlights of the day is watching the eight and nine year-olds perform the always popular “I’m a Yankee Doodle Dandy” where they belt out “…a real live nephew of my Uncle Fred, born on the Fifth of July!”  In addition, a few years ago they started regaling fellow campers with Katy Perry’s Firework, “You just gotta ignite the light, and let it shine, just own the night, like the Fifth of July!” 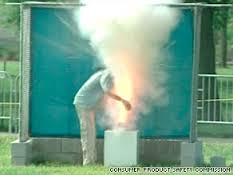 Feldstein testing out some of the discounted fireworks.

“I don’t understand what the big deal is anyway.  You think anyone has any idea what the date or day of the week it is at camp?  I didn’t think so.  Every day is the same!” lamented Feldstein, as he a nursed a wound from a defective Bottle Rocket during this morning’s practice run.